Mark 15:
Now it was the custom at the festival to release a prisoner whom the people requested. A man called Barabbas was in prison with the insurrectionists who had committed murder in the uprising. The crowd came up and asked Pilate to do for them what he usually did.

“Do you want me to release to you the king of the Jews?” asked Pilate, knowing it was out of self-interest that the chief priests had handed Jesus over to him. But the chief priests stirred up the crowd to have Pilate release Barabbas instead.

“What shall I do, then, with the one you call the king of the Jews?” Pilate asked them.

“Crucify him!” they shouted. 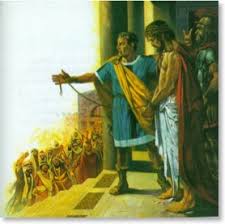 We can see here that it was customary to release a prisoner during the Feast of Unleavened Bread. This was a foreshadow of what is to come. The Jews betrayed their Messiah and had a murderer released and crucified the Lord. Peter was imprisoned during the Feast of Unleavened Bread and released on the 7th day of the Feast by an angel. Again, a foreshadow of what is to come. I believe that we will be "in prison" for 10 days (Revelation 2), before we are released. "Do not be afraid of what you are about to suffer. I tell you, the devil will put some of you in prison to test you, and you will suffer persecution for ten days. Be faithful, even to the point of death, and I will give you life as your victor’s crown."

Esther 1:
For a full 180 days he displayed the vast wealth of his kingdom and the splendor and glory of his majesty. When these days were over, the king gave a banquet, lasting seven days, in the enclosed garden of the king’s palace, for all the people from the least to the greatest who were in the citadel of Susa...On the seventh day, when King Xerxes was in high spirits from wine, he commanded the seven eunuchs who served him—Mehuman, Biztha, Harbona, Bigtha, Abagtha, Zethar and Karkas— to bring before him Queen Vashti, wearing her royal crown, in order to display her beauty to the people and nobles, for she was lovely to look at. But when the attendants delivered the king’s command, Queen Vashti refused to come. Then the king became furious and burned with anger.

I believe that these 180 days will begin on March 22, 2013, when the abomination is set up and that they will end on September 18, 2013. The next day (September 19, 2013) starts the 7-day Feast of Tabernacles. At the end of 180 days of displaying his glory, Xerxes gave a 7-day Feast and invited everyone to come, from the least to the greatest.

Luke 14:
“The servant came back and reported this to his master. Then the owner of the house became angry and ordered his servant, ‘Go out quickly into the streets and alleys of the town and bring in the poor, the crippled, the blind and the lame.’

“‘Sir,’ the servant said, ‘what you ordered has been done, but there is still room.’

“Then the master told his servant, ‘Go out to the roads and country lanes and compel them to come in, so that my house will be full. I tell you, not one of those who were invited will get a taste of my banquet.’”

At the end of the 180 days of the Lord displaying His glory to the world, I believe that He will once again invite them to the Wedding Feast. On the 7th day of this Feast of Tabernacles, I believe that He will again call His Bride to come to Him. God is not willing that any should perish, but that all should come to Him. Just like Queen Xerxes, many will STILL refuse the Lord and be left behind. I believe the first Rapture on the 7th day of Unleavened Bread is for the "firstfruits", those who have made themselves ready and pure, the "silver and the gold", who have been "made holy" and are "prepared for any good work" (see 2 Timothy 2; Joshua 6; Haggai 2).

I think that within 2 days of the 7th day of Tabernacles, the earth will begin to rotate faster and the days will become 16 hours long (4th trumpet judgment of Revelation) for the final 720 days of tribulation (Daniel divides the tribulation into "time, times, and half a time", or 360, 720, and 180 days). I believe that the 6 Seals of Revelation will open during this 180-day period and then the Trumpet judgments will begin after the main harvest rapture on the 7th day of Tabernacles (September 25, 2013). The wrath of God will begin as never before as the trumpet judgments begin. The 1260 days (180 + 1080 shortened days) would end on the Feast of Trumpets 2015, at the sound of the last trumpet.

This fits with the 7000-year plan of God and the 7 years (fall of 2009 to fall of 2016) being a representation of this 7000 years. The desolation of Israel took place at 3400 years into the 7000 years, or 3.4 years into the 7 years. The first temple was destroyed at this time and the second temple began to be built 70 years later. Then 4000 years into the 7000 years, Christ came and the New Covenant began. The second temple was destroyed shortly after this. He is now building His temple, His body, made of the silver and the gold (that's us)! The silver and the gold belong to Him. At the end of the 6th year, or 6000 years, He will return to earth. The Year of Jubilee (fall of 2015 to fall of 2016) represents the 1000 year Millennium, when Christ and His Bride are ruling and reigning on earth.