If you haven't already read this from fivedoves, here it is:
http://en.wikipedia.org/wiki/First_100_days_of_Barack_Obama%27s_presidency

Obama I Believe My Next 100 Days Will Be So Successful I Will Be Able to Complete Them in 72 Days!

The first 100 days of Barack Obama's presidency began with his inauguration on January 20, 2009 as the 44th President of the United States. The first 100 days of a presidential term took on symbolic significance during Franklin D. Roosevelt's administration, and the period is considered a benchmark to measure the early success of a president. Obama's 100th day in office was April 29, 2009. 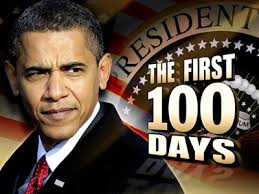 It is pretty shocking when you realize that "the first 100 days" of a presidency is considered significant and important, and it goes all the way back to Roosevelt's time. When Obama gave his speech back in 2009 (and I'm sure we all remember it and wondered what in the world he meant by it), he was actually telling us about his "next 100 days", or the next 100 days at the beginning of his second term. That's exactly what he was saying. At first, when I read the post by TJ, I kind of just smiled and thought, oh, that's kind of interesting, not really thinking there was anything more to it than coincidence. But when I researched this and found out that the first 100 days of a presidency are symbolic and important, a light bulb went on. You can do a google search and type in first 100 days and the name of any president back to Roosevelt and you will find articles about their "first 100 days". The first 100 days of a presidency are important.

So, when Obama said, and I quote: "Finally, I believe that my NEXT 'hundred days' will be so successful I will be able to complete them in 72 days. And on the 73rd day, I will rest," he was not talking about the second hundred days of his first term. He was talking about the NEXT "100 days", or the next "first 100 days" of his second term. That is exactly what he was saying. Nobody caught it.

This is why they did the secret swearing-in ceremony on January 20, 2013, so that the 72nd day of his second term would be April 1, 2013, April Fool's Day. Obama himself has told us what is coming and he did it almost 4 years ago. People have been wondering for years what he was talking about. Now we know. This was no joke or slip of the tongue. It was intentional. It was another clue that they have given to us that we missed.

Obama also said that in his second term, he will win the war on Christmas. Both of these statements that he made pointed to Christmas and Easter. There is a war going on; it's a spiritual battle between the forces of light and darkness. Two of Satan's primary dates for worship used to be December 25 (birth of sun god) and Easter (Ishtar). These holidays used to be HIS days, when HE was worshiped around the world by many different cultures. Now, Christmas and Easter are about the birth of Jesus and resurrection of Jesus. These holidays are primarily times when Jesus is honored and worshiped by Christians around the world. There is a spiritual battle here.

Remember to watch, "Rise of the Guardians" when it comes out on DVD this March. The Boogie Man represents Satan. Here are some quotes by the evil Boogie Man from the movie:
"Maybe I want what you have, to be believed in. Maybe I'm tired of hiding under beds!"
"I do know what it's like to be cast out, to not be believed in! To long for... a family... All those years in the shadows, I thought no one else knows what this feels like... but now I see I was wrong."
“The dark ages were happy times, but then the man in the moon chose you to replace me—filling their hearts with wonder and light.”

And Santa Claus said, “As much as it pains me to say it, this time Easter is more important than Christmas.”

In the movie, three days of darkness begin 3 days before Easter (Good Friday) and a great deliverance and resurrection of the dead takes place on the evening of Easter Sunday - which is the start of the 7th day of Unleavened Bread. 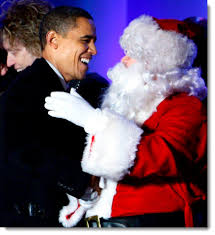 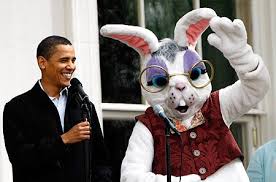 But, wait, there's more! April 1 has been pointed to before. This ad came out on April Fool's Day in 2011:
http://www.youtube.com/watch?v=VIA5aszzA18&feature=player_embedded

It ends with Obama riding a white horse across the sky. I just found it interesting that this came out right on April first, 2 years ago, and depicts Obama as a sort of "Messiah", coming on a white horse.

"I saw heaven standing open and there before me was a white horse, whose rider is called Faithful and True. With justice he judges and wages war. "

Is this another warning to the world of Antichrist Messiah starting his "rule" on April 1?

This ad came out a year earlier, on April 1, 2010. Again, we have a rainbow with a flying white unicorn, although it wasn't being ridden by Obama this time. But it's very interesting that both ads came out April 1 and both point to a flying white unicorn with a rainbow. Here's another quote from Rise of the Guardians by the evil Boogie Man, ""Oh, I thought I heard the clippity-clop of a unicorn!" Notice that these are not just white horses, but UNICORNS. 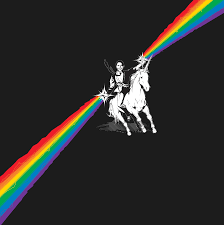 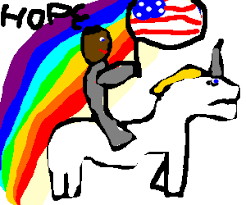 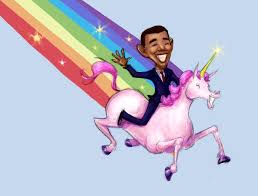 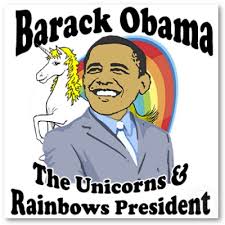 So, this got me to thinking. This rainbow must symbolize Easter if they have it in both of these videos on April 1 with a white unicorn ushering in their Messiah.

The Goddess Ostara and the Easter Bunny

Feeling guilty about arriving late one spring, the Goddess Ostara saved the life of a poor bird whose wings had been frozen by the snow. She made him her pet or, as some versions have it, her lover. Filled with compassion for him since he could no longer fly (in some versions, it was because she wished to amuse a group of young children), Ostara turned him into a snow hare and gave him the gift of being able to run with incredible speed so he could protect himself from hunters.

In remembrance of his earlier form as a bird, she also gave him the ability to lay eggs (in all the colors of the rainbow, no less), but only on one day out of each year.

Eventually the hare managed to anger the goddess Ostara, and she cast him into the skies where he would remain as the constellation Lepus (The Hare) forever positioned under the feet of the constellation Orion (the Hunter). He was allowed to return to earth once each year, but only to give away his eggs to the children attending the Ostara festivals that were held each spring. The tradition of the Easter Bunny had begun.

Article #2:
From earliest times, and in most cultures, the egg signified birth and resurrection. The Egyptians buried eggs in their tombs. The Greeks placed eggs atop graves. The Romans coined a proverb: Omne vivum ex ovo, "All life comes from an egg." And legend has it that Simon of Cyrene, who helped carry Christ’s cross to Calvary, was by trade an egg merchant. (Upon returning from the crucifixion to his produce farm, he allegedly discovered that all his hens’ eggs had miraculously turned a rainbow of colors; substantive evidence for this legend is weak.) Thus, when the Church started to celebrate the Resurrection, in the second century, it did not have to search far for a popular and easily recognizable symbol.

Another article - this one really ties in with the "Rise of the Guardians" movie (in the movie, there were no Easter Eggs to deliver and the children of the world all lost hope and they lost their belief in the Easter Bunny, Santa Claus, and the Tooth Fairy, but just as the last flicker of hope was about to go out - the one child who still believed in them kept them alive - and the night of Easter Sunday, the evil Boogie Man was defeated):
The Hutsuls––Ukrainians who live in the Carpathian Mountains of western Ukraine––believe that the fate of the world depends upon the Easter Egg . As long as the egg decorating custom continues, the world will exist. If, for any reason, this custom is abandoned, evil––in the shape of a horrible serpent who is forever chained to a cliff–– will overrun the world. Each year the serpent sends out his minions to see how many Easter Eggs have been created. If the number is low the serpent's chains are loosened and he is free to wander the earth causing havoc and destruction. If, on the other hand, the number of Easter Eggs has increased, the chains are tightened and good triumphs over evil for yet another year.

Another legend tells of when Mary Magdalene went to the sepulchre to anoint the body of Jesus. She had with her a basket of eggs to serve as a repast. When she arrived at the sepulchre and uncovered the eggs, the pure white shells had miraculously taken on a rainbow of colors.