This is an interesting sketch done in prayer by Nicole Poon and friend
This was made at the start of the infestation
To me this is the Israel flag, so it is the nation of Israel being attacked by locusts
The plague of locusts was one of the last plagues to his Egypt for the Pharaoh's stubbornness
So we see a possible correlation with Obama going over there soon
This is a comment under her drawing
The locusts that came from Egypt are now attacking Israel. The swarms are moving toward the center of the country. From Israel National News:
"... the plague could get much worse; the hot weather expected during the rest of the week was the “perfect storm” for a major invasion of locusts in the Sharon, and perhaps even further north. Southern winds will carry the swarms, and the winds will raise the temperatures in Israel significantly ..."
Source: http://www.israelnationalnews.com/News/News.aspx/166101
https://picasaweb.google.com/100359770173085133474/VisionsMarch2013#5854025457216114210 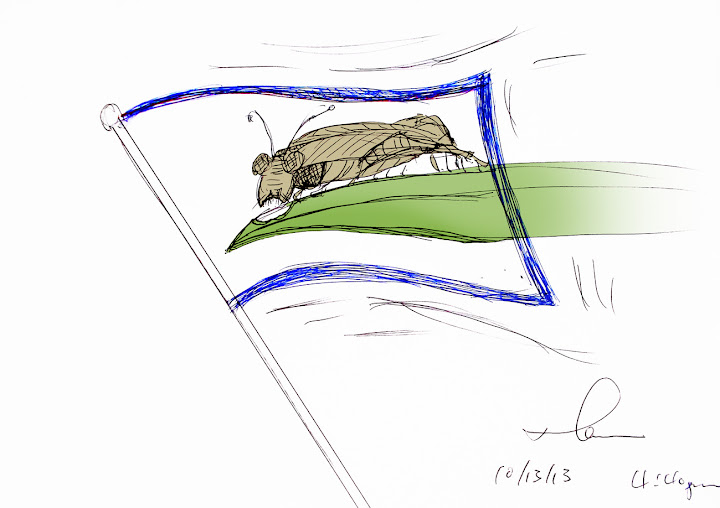 10th March 2013/
This day we studied about the fulfillment of God's prophecies to Esau and Jacob until today.I asked God for His soon return according to His prophecy even none of us know the time.
God showed a locust nibbling a leaf appeared on a white flag with blue edge
This sketch is also interesting
Also reminds me of the scripture that says "If your eye is clear"
Meaning the light of Jesus is in you and sin and darkness has been cast out. 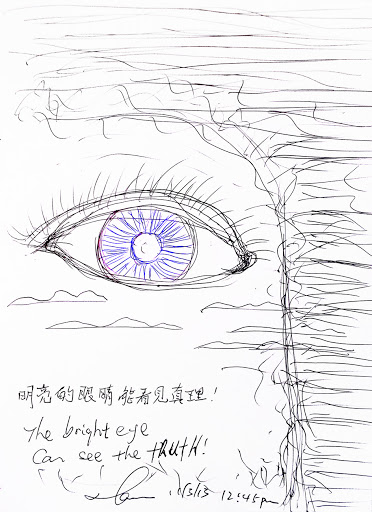 11th March 2013/
God is so awesome that we can experience His reality.I prayed for those who worship idols and atheists that could realize true God.
God showed an big eye in the air and with words,"The bright eye can see the truth."